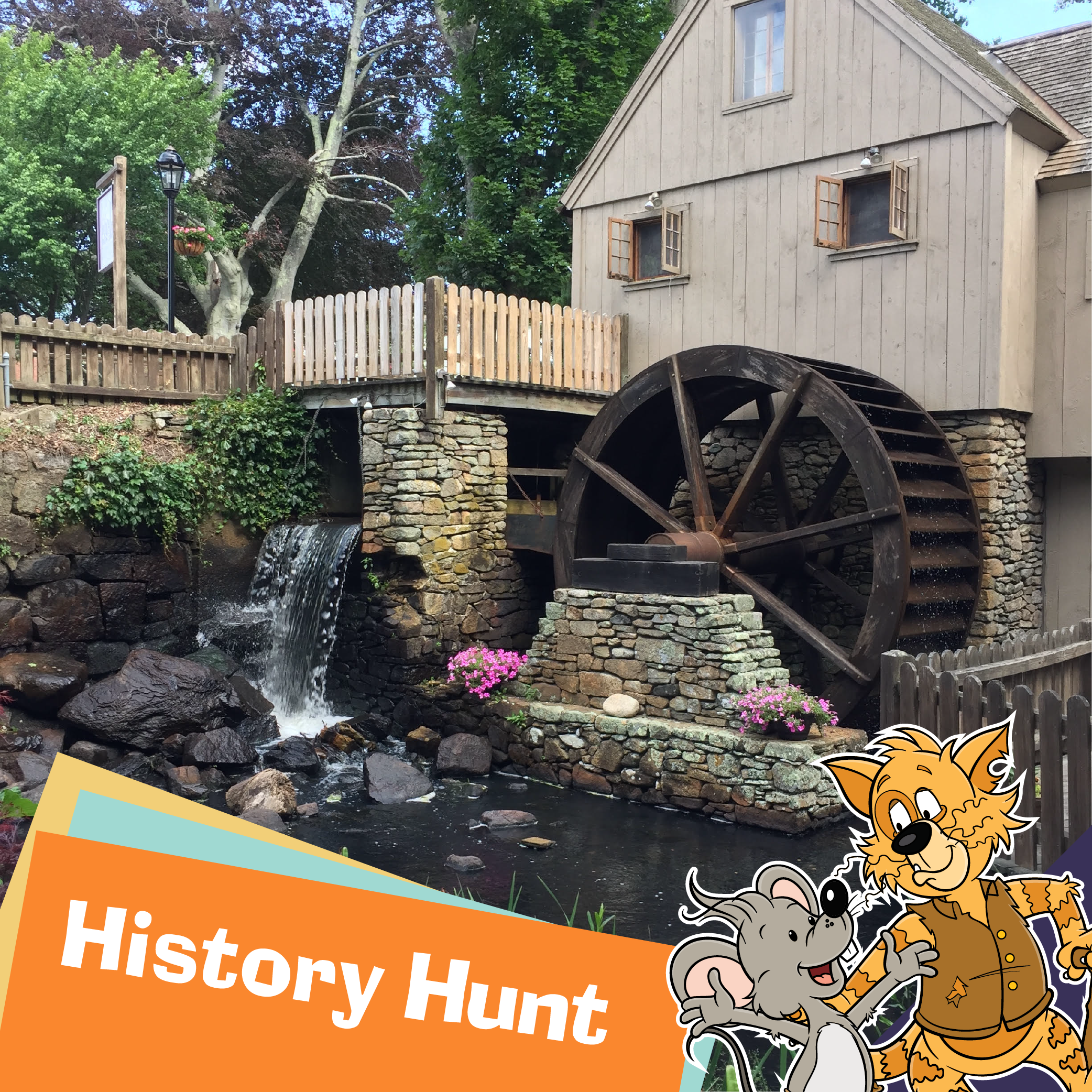 The Plimoth Grist Mill, operated by Plimoth Plantation is a working mill that uses water power to mill organic corn into delicious, freshly ground cornmeal on their 200-year-old French Buhr millstones. Located near the Plymouth waterfront at 6 Spring Lane, the Plimoth Grist Mill is a great place to visit with the kids.

Here’s some history on the Grist Mill from Plimoth.org:

“Nestled alongside bucolic Town Brook, and just a short walk from the waterfront and Mayflower II, the Plimoth Grist Mill tells the story of the grist (corn grinding) mill built by the Pilgrims in Plymouth Colony. After more than a decade of laboriously grinding corn by hand in wooden mortars, the colony authorized the construction of a water-powered corn grinding mill on Town Brook in 1636. Colonist John Jenney was given permission to run the mill and to take a portion of the corn that was brought for grinding as a payment or “toll.” After his death in 1644, John Jenney left the mill to his wife Sarah. Sarah, and later their son Samuel, ran the mill until 1683.

Our mill is a reproduction of the 1636 mill and was completed in 1970. Many of the parts (the stones, spindle, and stone furniture) are from the early 1800s and were salvaged from a mill near Philadelphia, PA. On days when we are milling corn, watch as the miller orchestrates the water wheel, gears, and stones to turn out delicious, fragrant cornmeal.”

You can purchase cornmeal and other products in their gift shop! 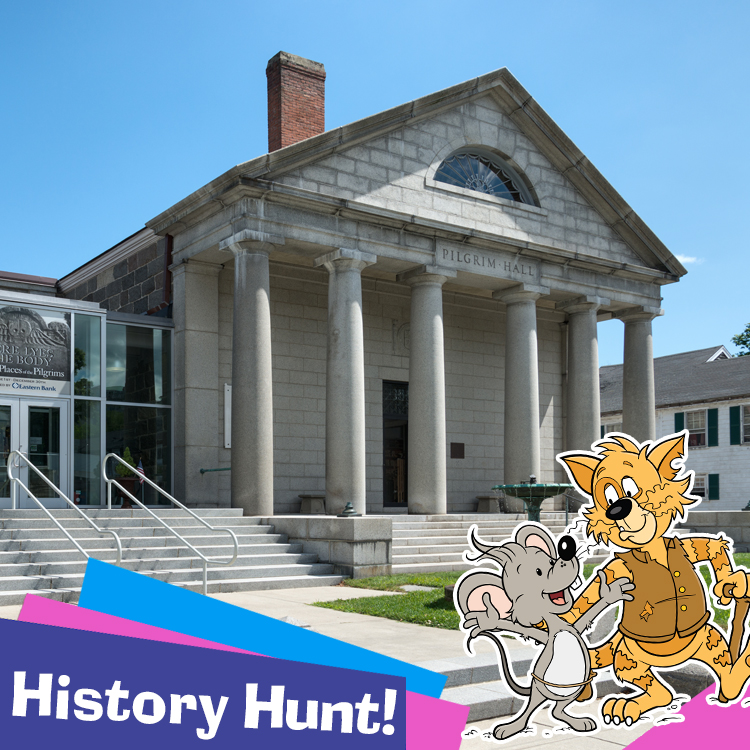 Have you visited Pilgrim Hall Museum in Plymouth, MA? It’s the nation’s oldest continuously operating public museum and a great place to learn about the lives of the Pilgrims and the Wampanoag. You’ll find an unmatched collection of Pilgrim possessions including William Bradford’s Bible, Myles Standish’s sword, the only portrait of a Pilgrim (Edward Winslow) painted from life, the cradle of New England’s firstborn, Peregrine White, the great chair of William Brewster, and the earliest sampler made in America, embroidered by Myles Standish’s daughter.

At Pilgrim Hall Museum, you will also learn the story of the Wampanoag, "People of the First Light," the Native People who inhabited this area for 10,000 years before the arrival of the new settlers and who are still here today.

Pilgrim Hall Museum is located at 75 Court Street in downtown Plymouth. Visit their website for a schedule of exhibits and special events: pilgrimhall.org. 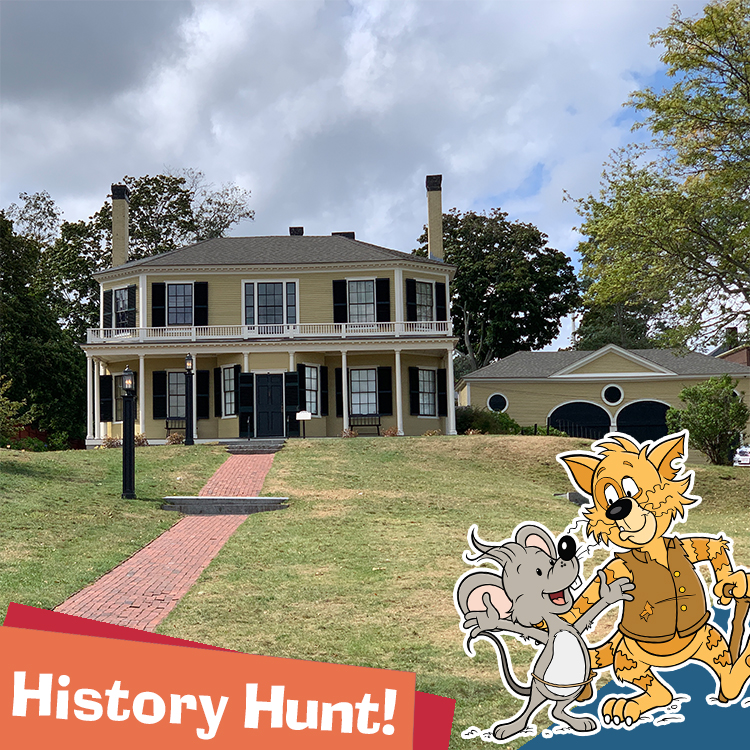 One hundred years ago, the 1809 Hedge House on Water Street in Plymouth was relocated to its current location. It originally stood where Memorial Hall stands today. Here’s a little History Hunt lesson from the PlymouthAntiquarian.org website:

The 1809 Hedge House is one of Plymouth’s finest examples of Federal period architecture, featuring octagonal rooms in the main block and a rare intact carriage house. Built by sea captain William Hammatt, the house was originally located on Court Street, where Memorial Hall is today.

In 1830 merchant Thomas Hedge purchased the house and added a three-story ell to accommodate his large family. The Hedges owned a Main Street store, a waterfront counting-house, and Hedges Wharf, which once surrounded Plymouth Rock. Thomas Hedge was one of Plymouth’s early industrialists and entrepreneurs, investing in the town’s first whaling ventures, building a candle factory to process whale oil, and partnering with his brother Isaac in a brick manufactory.

The house was lived in by Hedge family members until the death of the last resident, Lydia Hedge Lothrop, in 1918. Threatened with demolition to clear the way for the construction of Memorial Hall, the house was rescued by the Plymouth Antiquarian Society. The Society bought the house for $1 in 1919 and arranged to have the building moved to Water Street.

Guided tours last approximately 45-60 minutes and are offered during public hours or by appointment. 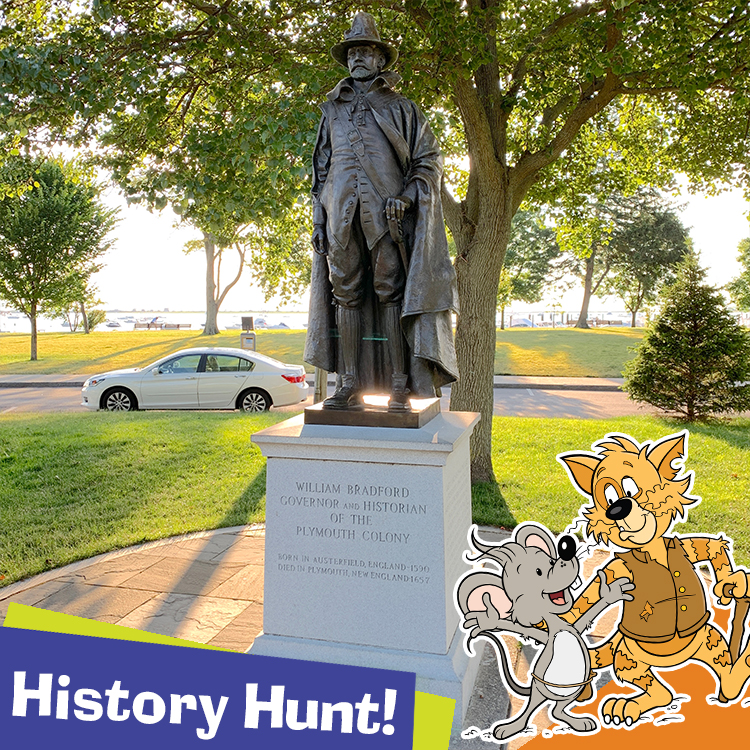 The William Bradford Statue was commissioned as part of Plymouth’s 1921 Tercentenary commemoration to honor the second and longest-serving governor of Plymouth Colony. The smaller-than-life-sized sculpture was designed by Cyrus E. Dallin and was cast and installed in 1971. It is located on Water Street, not far from Plymouth Rock. You can learn more about Governor Bradford by visiting The Pilgrim Hall Museum in Plymouth where the William Bradford Bible is on display.

William Bradford (1590-1657) was a founder and longtime governor of the Plymouth Colony settlement. Born in England, he migrated with the Separatist congregation to the Netherlands as a teenager. Bradford was among the passengers on the Mayflower’s trans-Atlantic journey, and he signed the Mayflower Compact upon arriving in Massachusetts in 1620. As Plymouth Colony governor for more than thirty years, Bradford helped draft its legal code and facilitated a community centered on private subsistence agriculture and religious tolerance. Around 1630, he began to compile his two-volume “Of Plimoth Plantation,” one of the most important early chronicles of the settlement of New England. 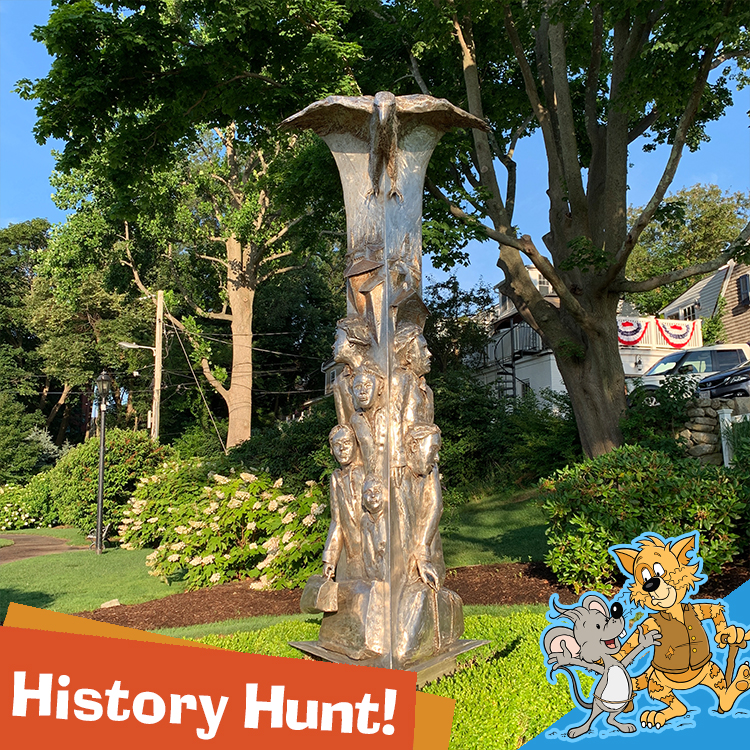 Have you visited the Plymouth Immigrant Memorial in Plymouth?

Here’s some interesting information about this beautiful sculpture from Destination Plymouth:

The Plymouth Immigrant Memorial in Brewster Gardens was designed by Barney Zeitz, and serves as a tribute to the men and women who were America’s first immigrants. He deliberately designed the six faces on the monument to reflect the different backgrounds of people who have immigrated to the United States.

The sculpture was dedicated on-site on the Plymouth waterfront by the late Rev. Dr. Peter J Gomes on Oct. 6, 2001. Barney Zeitz can clearly recall where he was less than a month earlier, on Sept. 11, 2001. When the airplanes hit the World Trade Center towers in New York City, Zeitz was on a ladder working on the monument. The eagle at the top of the monument serves as a reminder of the freedoms immigrants are looking for when they move here. 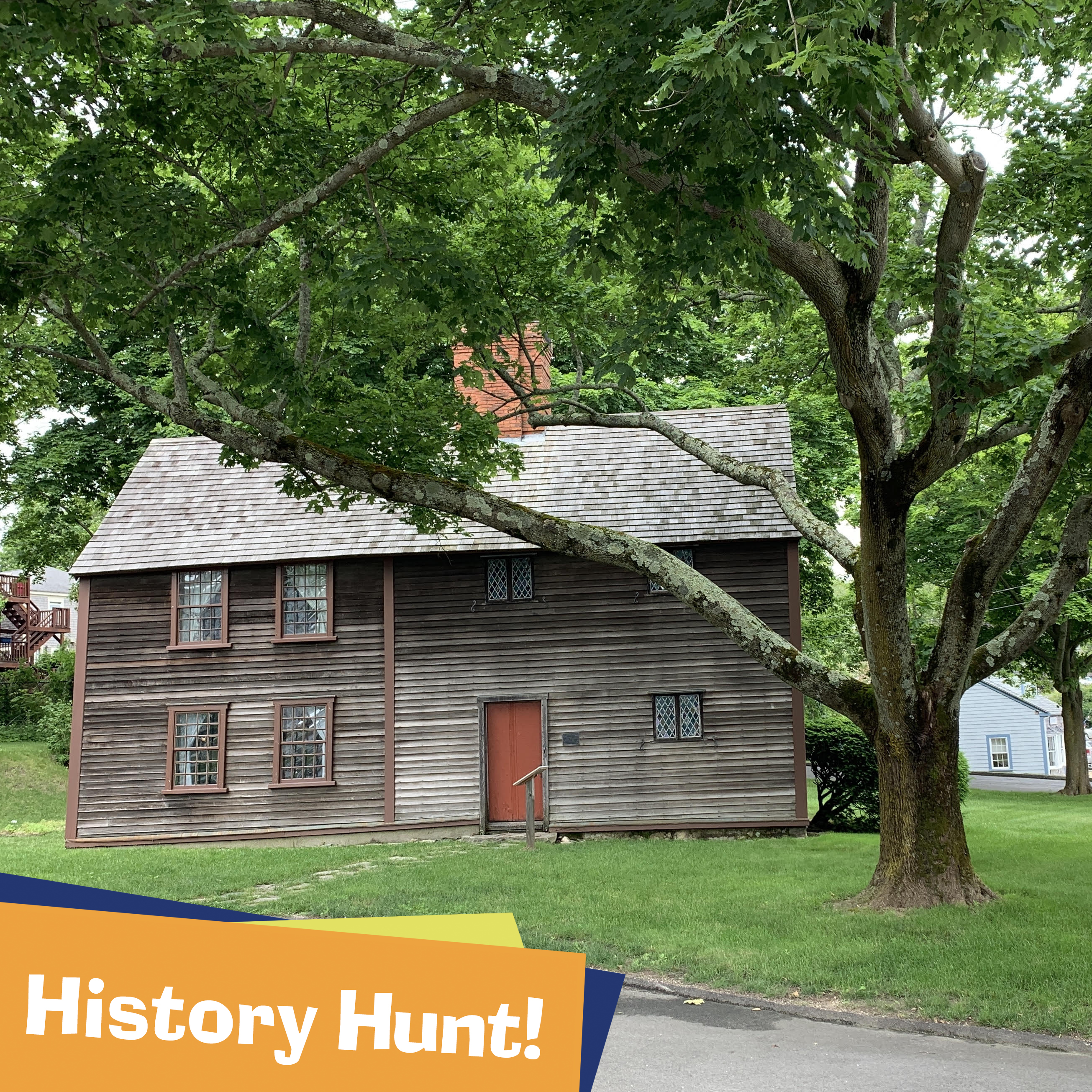 Have you visited the Jabez Howland House on Sandwich Street in Plymouth?

Here’s some information about this historic home from The Pilgrim John Howland Society:

The Jabez Howland House is the only existing house in Plymouth where Pilgrims actually spent time. The original 17th-century two-story timber-framed house consisted of the porch, hall and hall chamber. Jabez Howland, John and Elizabeth's son, lived here with his family until they sold the house in 1680. It was a private residence until 1912 when it was purchased for a museum. The Howland House is a National Register of Historic Places site.

In the 1940s extensive work was done to bring it back to its original appearance. Today the museum houses fine period furniture as well as artifacts from archeological digs at the Rocky Nook homes of John and Elizabeth and their son Joseph’s farm. See 17th-century fine period furniture as well as artifacts, letters and documents, letters from famous descendant Franklin Delano Roosevelt and "cousin" Winston Churchill (who is descended from Arthur Howland, John's brother), plus many other exciting things. 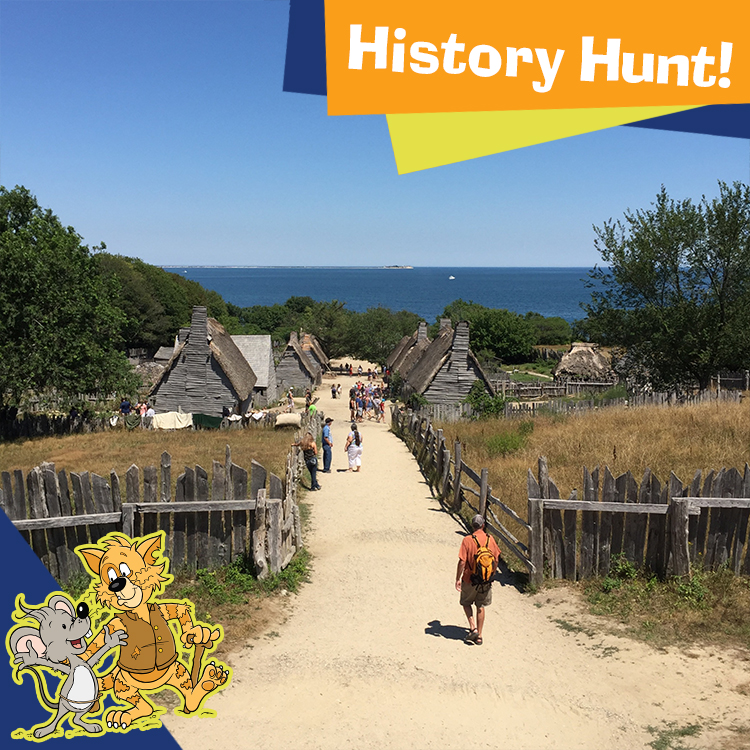 Summer is a great time to visit Plimoth Plantation and learn about our rich history!

Located three miles south of the Plymouth waterfront, Plimoth Plantation is a living history museum dedicated to telling the history of Plymouth Colony from the perspective of both the Pilgrims and the Native Wampanoag people.

The museum is a Smithsonian Institution Affiliate that includes the Wampanoag Homesite, 17th-Century English Village, Craft Center, Plimoth Bread Company, Plimoth Grist Mill and Mayflower II (under repair - due back in 2020), a full-scale reproduction of the original ship that sailed to Plymouth in 1620. The Plantation Visitor Center offers an indoor gallery exhibit, Cinema, and the Patuxet Café, serving delicious New England fare. Browse their award-winning museum shops for unique, historically-inspired items. 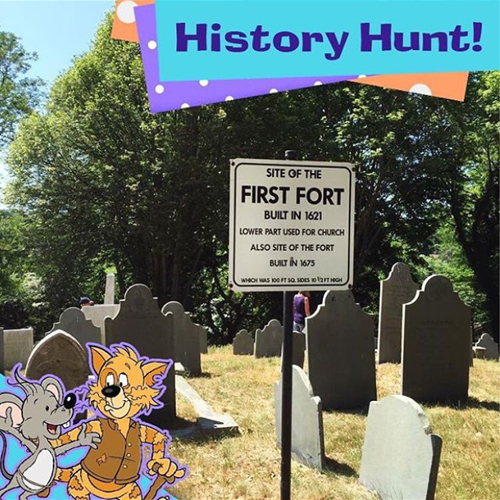 From 1620 to 1676, Burial Hill was known as Fort Hill and was the site of the First Fort and meetinghouse. Set high atop the hill, the Pilgrims placed their cannons facing the harbor for protection. In addition to its military function, the Fort/Meetinghouse was also used as a meeting place for religious services and as a courthouse for the colony's legislative and judicial affairs. You can visit a replica of the fort blockhouse at Plimoth Plantation. Once the hill was no longer needed for military purposes, it became the town's primary burial ground and remained an active burial place for nearly 300 years. 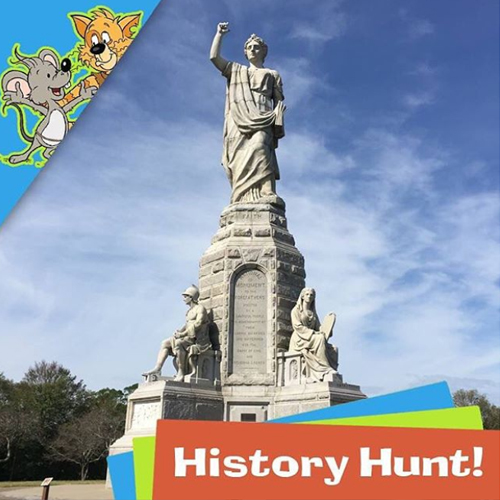 Have you visited the National Monument to the Forefathers in Plymouth? Here's a History Hunt lesson from Destination Plymouth County.

Thought to be the largest solid granite monument in the United States, this 81-foot-tall granite statue was built to honor the passengers of the Mayflower. Boston sculptor Hammatt Billings designed the monument which features allegorical figures depicting the virtues of Faith, Morality, Education, Law, and Liberty. A dedication on the monument reads,

“National Monument to the Forefathers. Erected by a grateful people in remembrance of their labors, sacrifices, and sufferings for the cause of civil and religious liberty.”

The original design called for the monument to be nearly twice as tall at 150 feet (just under the Statue of Liberty’s height of 151 feet).

The monument, located at 72 Allerton St., is free to visit and open to the public year-round. Its site is managed and maintained by the Massachusetts Department of Conservation and Recreation. .
For more info, check out the Forefather's Monument video (link in bio). 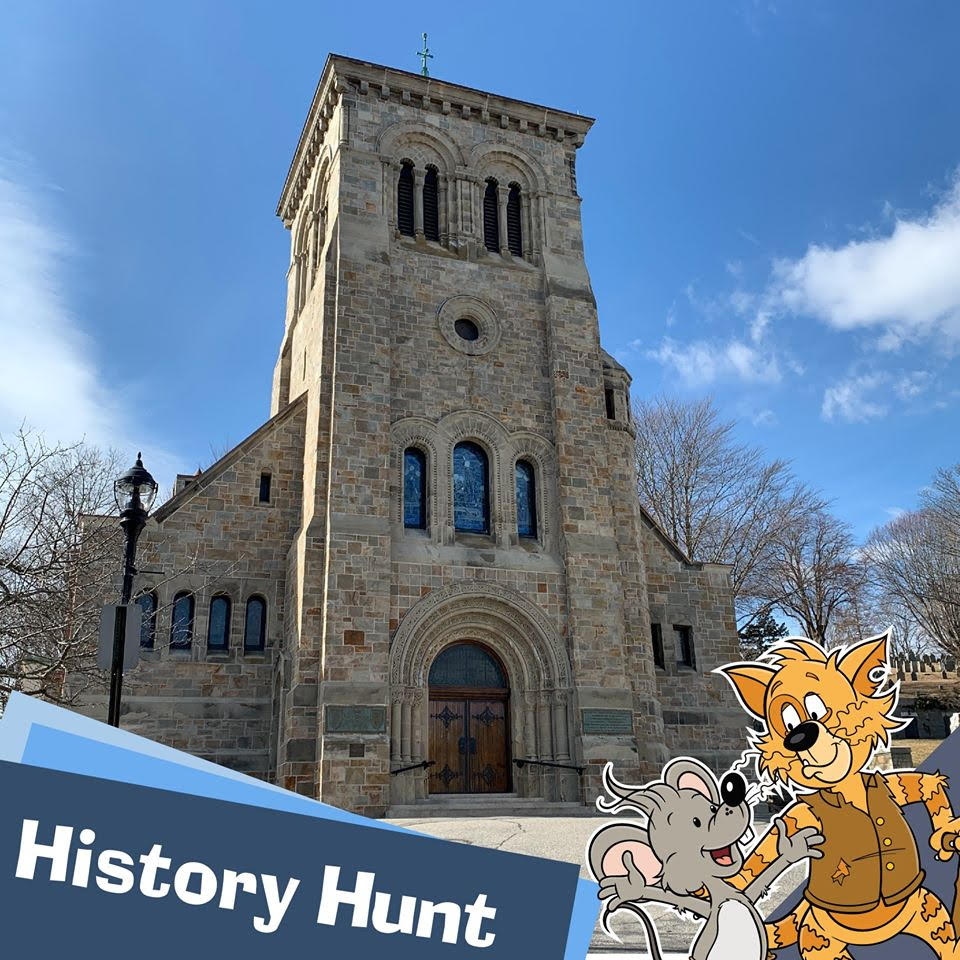 Have you been to the Mayflower Meetinghouse, formerly known as First Parish Church? The church is located at Town Square in Plymouth. In 2018 the church and the congregation’s early records were donated to the General Society of Mayflower Descendants (GSMD), which is currently maintaining and restoring the building.

The building, built in 1897, is actually the fifth meetinghouse in its present location.

According to the Mayflower Society, when the Meetinghouse was first built, it was meant to be a lasting memorial to the Mayflower Pilgrims. It sits at the base of historic Burial Hill just below the site of the first Meetinghouse, where the Pilgrims gathered 400 years ago.

Records of the congregations through the years date back to 1606 from Scrooby, England, where the Separatists worshiped in secret in William Brewster’s manor house. The site of the First Parish church is known as the oldest continuous spiritual location in America.

The Meetinghouse is also famous for its Norman architecture, unaltered Arts & Crafts interior, and unique stained-glass windows. The Mayflower Meetinghouse celebrates the freedoms established by the Pilgrims—freedoms that draw immigrants to America: civil and religious liberty, and the right to trial by a jury of one’s peers.

In 2014, the Meetinghouse was listed on the National Register of Historic Places by the United States Department of the Interior due to its historic importance and architectural significance. Like the previous four Pilgrim Meetinghouses, First Parish remains the centerpiece of Plymouth’s historic Town Square.

For information about the Mayflower Meetinghouse restoration, please visit their Facebook page: https://bit.ly/2Z0VZBu 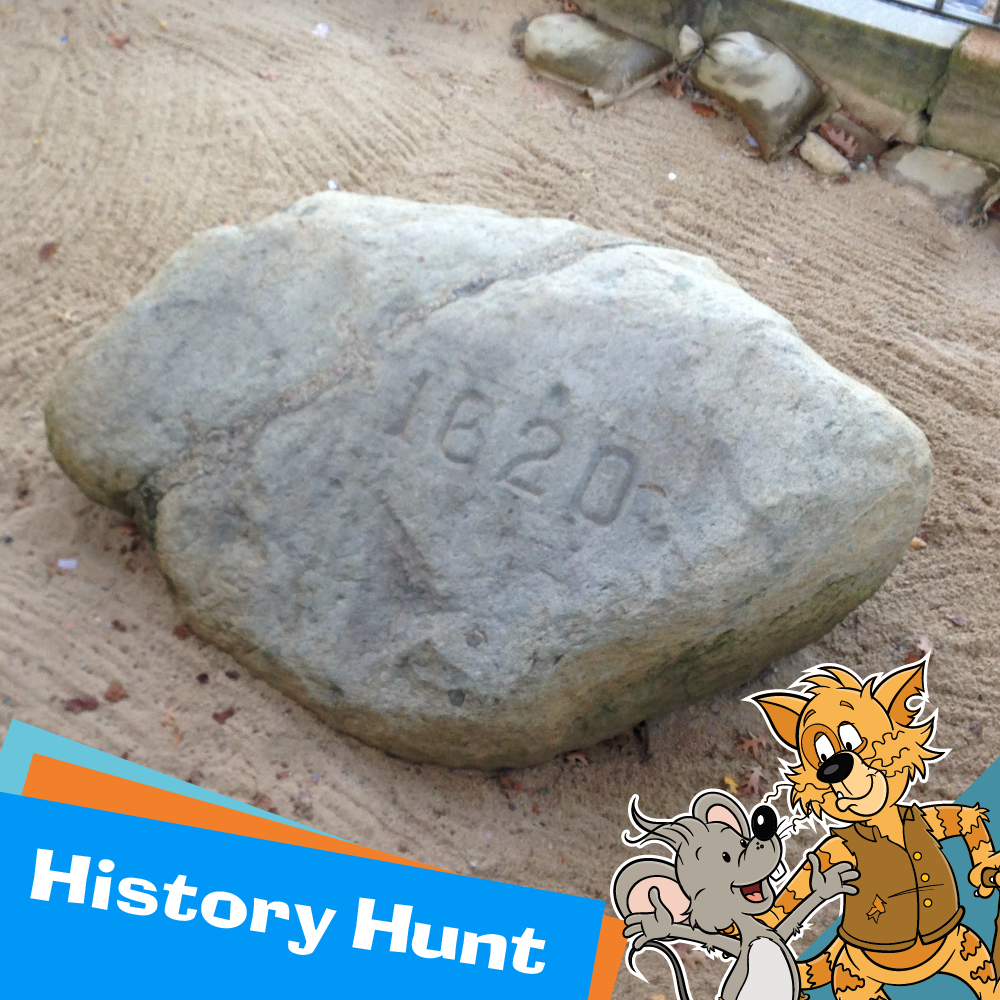 Like the Mayflower, Plymouth Rock is one of the most famous symbols of America’s founding story. It’s located on the Plymouth waterfront under a portico that was constructed for the town’s Tercentenary (300th anniversary) in 1921. Here’s some info from See Plymouth: "Located in Pilgrim Memorial State Park on the shore of Plymouth Harbor, this simple glacial erratic boulder has become a world famous symbol representing something different to each person who looks at it.

Although no historical evidence exists to confirm Plymouth Rock as the Pilgrims’ actual steppingstone to the New World, the boulder was identified as this spot in 1741, 121 years after the arrival of the Mayflower.

Thomas Faunce, a 94-year-old church elder who said his father, who arrived in Plymouth in 1623, along with several of the original Mayflower passengers assured him the boulder was the exact landing spot. When the elderly Faunce heard that a wharf was to be built over the rock, he wanted one final glimpse. He reportedly gave Plymouth Rock a tearful goodbye. Whether Faunce’s assertion was accurate or not, we may never know. What we do know, is that Plymouth Rock quickly became an American icon and a tangible monument to freedom. Nearly four centuries after the arrival of the Pilgrims, Plymouth Rock is viewed by more than one million visitors each year."

For a more detailed history of Plymouth Rock, check out this page from Pilgrim Hall Museum: https://pilgrimhall.org/plymouth_rock.htm